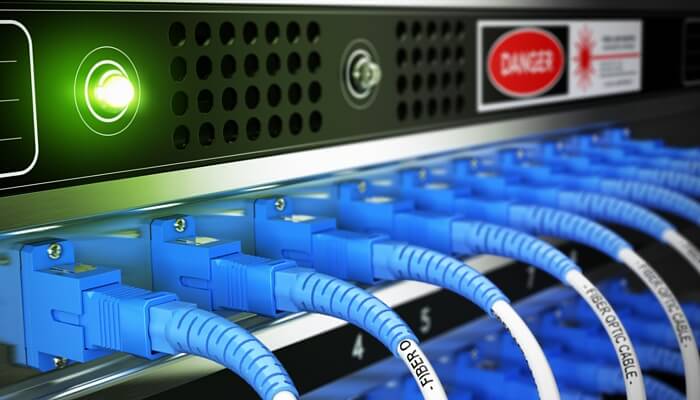 Internet connectivity over fiber-optic networks has become the gold standard for fast, high-quality data transmission for businesses. The relatively new nature of this technology can leave some hesitant to invest in it for their business.

Fiber relies on light instead of electricity to transmit data, which facilitates much faster Internet connections that are capable of handling higher bandwidth. According to the FCC, fiber providers consistently offer 117% of advertised speed, even during times of peak demand.

While most business decision-makers are aware of the speed benefits of fiber, other advantages are less commonly understood. Spending on a newer technology can feel risky, especially for organizations who rely heavily on their Internet connectivity for customer communications, productivity, and collaboration.

In this article, you'll learn a bit more about the various ways fiber-optic Internet compares to standard copper cable, including bandwidth potential, speed, reliability, among other factors.

Investing in fiber-optic internet can significantly increase your bandwidth potential. Copper wire infrastructure and TDM technology are limited in nature. Because it was originally designed for transmitting voice calls only, the demand for bandwidth wasn't high. For instance, T-1 can only carry 1.5 Mbps of throughput. And because of how electrical signaling works, many types of connections over copper are limited by distance.

Ethernet over Copper service (EoC) is typically not available if the circuit is longer than 15,000 feet. For organizations considering shifting their voice communications to Voice-Over-IP (VoIP), having your bandwidth delivered over fiber can be an indispensable asset.

Is the speed increase of fiber-optic internet noticeable compared to copper? Absolutely.

Many Atlantech Online customers using fiber to connect to our network can transmit data at 1 gigabit per second. That's many times faster than the federal government's definition of broadband service, which is 25Mbps uploads and 3Mbps for downloads as of January 2015.

With this technological advancement, the concept of "waiting for things to load" is about to be a thing of the past.

The signal for copper Internet networks degrades as the signal is carried from the central office (CO). Fiber was originally used for long haul networks. Cell phone towers in remote locations use fiber optic cable to connect towers to the network.

In an era of increased attention towards cyber security, fiber-optic internet is touted as a cost-effective way of instantly increasing your Internet security. Intercepting copper cable can be performed by connecting taps to a line to pick up the electronic signals.

Putting a tap on a fiber-optic internet cable to intercept data transmissions is incredibly difficult. It's also easy to quickly identify compromised cables, which visibly emit light from transmissions.

There are a number of factors that can cause outages when an organization is reliant on copper cable-based internet. Temperature fluctuations, severe weather conditions, and moisture can all cause a loss of connectivity. Old or worn copper cable can even present a fire hazard, due to the fact it carries an electric current. Additional reliability concerns associated with copper include risks of interference from electronic or radio signals. Additionally, copper wires are accessed in the building by telephone company personnel and sometimes they can make mistakes and fiddle with the wrong wires. Also, copper wires all go back to the telephone company Central Office where disconnections can happen. Fiber is typically independent of the phone company, their equipment and their termination points.

The speed of internet transmitted via copper cable is directly correlated with the weight of cable used. For a business to achieve a higher speeds, more cable must be used, which requires more space in a company's telecommunications room.

Fiber cable's speed is not connected to its size, and it's far lighter weight than copper. This renders it easier to use, and less demanding of limited space in small rooms.

Investing in fiber internet will cost more than copper in the short term though costs are drastically decreasing as this option becomes more commonplace. Ultimately, the total cost of ownership (TCO) over the lifetime of fiber is lower. It's more durable, cheaper to maintain, and requires less hardware.

The advantages of fiber make it overall, a more cost-effective investment for organizations of all sizes.

Copper cable is a relatively delicate technology. Typically, it can sustain about 25 pounds of pressure without being damaged, which means it can be compromised with relative ease during routine operations in a company's telecommunications space.

In contrast, fiber can withstand about 100-200 pounds of pressure, meaning it is far less likely to be damaged during routine operations in close proximity.

While organizational information technology needs can vary drastically, the benefits of fiber-optic internet are making it an increasingly common choice for business data transmission. Companies who choose to invest in fiber typically find that the total cost of ownership, bandwidth potential, and speed gains are noticeable.

For more information on Atlantech's fiber internet solutions for businesses, click here to learn more about connecting your location.

Post by Tom Collins
December 28, 2015
Tom is the Director of Enterprise Sales & Marketing for Atlantech Online. He has over 20 years of professional experience in the Internet Service Provider industry and is known for translating technology into positive results for business. A native of Washington, DC, a graduate from University of Maryland (degrees in Government & Politics and Secondary Education), Tom is also a five-time Ironman finisher.